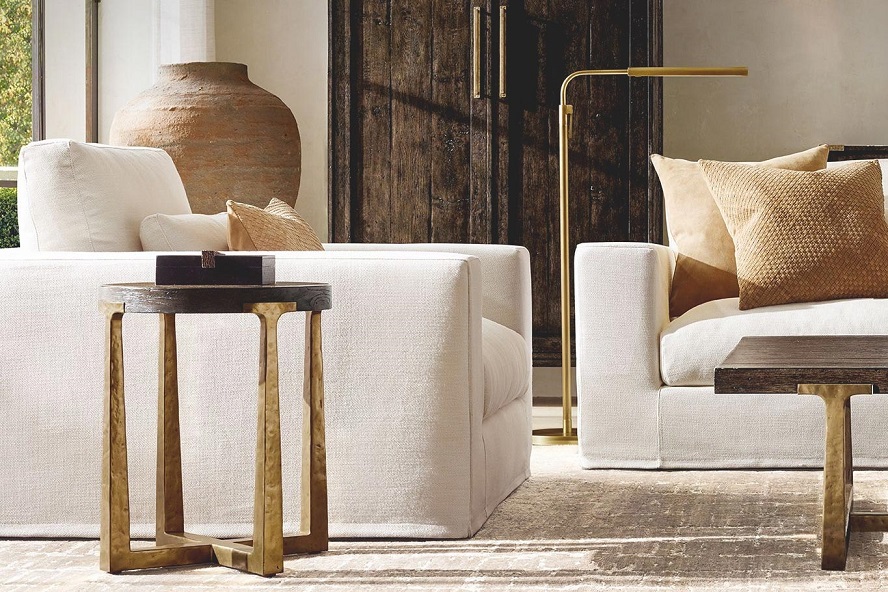 Did you know that many of the English interior design terms we use today have their origin in the French language? Take the word décor, for example – a term that is so widely used, it’s become a part of our modern English lexicon. Then there’s the word buffet – so much more than just a self-service station at a wedding, you know.

These are the quintessential terms you need to know in French décor:

The literal translation is long chair which, quite frankly, sounds a lot fancier in French. What it is essentially, is an elongated seat much like the kind you’d expect to find in a therapist’s office. The French variety though is often embossed in decadent damask or lush velvet and trimmed in antique gold. Just imagine Marie Antoinette languidly lazing about in The Palace of Versailles and you’ve got the picture.

Yep, this one is actually derived from an old 16th-century French word cabine (meaning the sleeping quarters on a ship). The modern-day French reincarnation retains some of that olde-worlde charm too. One trait shared by many French people is the habit of holding onto items until they literally fall apart. That equates to a lot of stuff. Expect to find cabinets liberally littered throughout a French home: in the kitchen for storing spices and condiments, the bathroom to store medicines and makeup, the bedroom for various odds and ends, and so forth. Get some of that vintage French flavor by using cabinets of all sorts and sizes to organize your own odds and ends.

The term may not be that familiar to English ears but you’ve most likely come across this type of motif. This style can best be described as Asian-inspired art and décor. What started in 18th century France as the mere import of silk and porcelain from Japan and China has turned into a fully-fledged design sector. Delicately crafted flowers adorn everything from designer furniture hong kong and fabrics to pottery and wall art. Whether the real deal or not, a beautifully embroidered armchair or a finely engraved vase may be all you need to enchant a room with some historical charm.

No, we don’t mean your trusty computer keyboard. This French décor staple refers to a rectangular table often seen in the entryway of a home. You’ll typically find metal trays on them housing essentials like keys, small change, and mail. This piece of furniture is the first item your guests see upon entering your home. Make sure yours plays host to a design element like a classic lamp and an elegant yet simple flower decoration.

We call it a patio, the French speak of le terrace: that hallowed ground surrounding a chateau or a simple maison made up of rambling green lawns and little cobblestoned pathways. You may not have the same kind of elaborate sprawling greens to work with but don’t underestimate the effect that a few outdoor chaise longues and pretty garden furniture can have.

The literal translation in English would be “foot on ground” but to your average Parisian, it’s an apartment in the city generally used as a second home away from the owner’s main residence further away.

A properly French design concept, a séjour is typically found in Parisian apartments and describes two salon areas joined together by a pair of French doors.

You’d be forgiven for thinking that these originated in a Middle Eastern country. Tapisserie is a French word meaning rug and denotes those heavily embroidered carpets so often found hanging on the walls of French living rooms.

The French person’s favorite way to organize letters, memos and other day-to-day admin essentials is the secrétaire. It’s usually smaller than a cabinet and consists of a partition that folds open to reveal smaller pigeonhole compartments inside. It could even double as a cute console in your home’s hallway.

An armoire is French for wardrobe and usually stores bed linens and clothing. If you’re wondering where its name derives, look back to medieval times. It may be hard to believe but these tall closets were once used to house weapons and armory (armes is French for arms or ammunition).

Much like the wedding food display we know it by, the French version of a buffet is a piece of interior decoration hong kong on which to serve wine glasses, crockery and other dinner service ware. Give your buffet a modern edge by using it to house a fully stocked bar.

These comfortable plush seats actually originate way back in the early 1900s and were once much larger than the ones we know today. Think a full sofa size, able to seat several people at once.